Photo of the Day – Polar Bears 1

Photo of the Day – Polar Bears 1

Photo of the Day

Polar Bears of the Wapusk-1

It’s mid November and the polar bears of the Wapusk National Park in Manitoba, Canada have gathered. It’s not for their annual visit to the dentist as it may appear in this Photo of the Day by David C. Schultz but they’ve come here along the shores of the Hudson Bay waiting for it to freeze. Once the Bay has frozen over the bears will head out onto the ice to begin the long brutally cold winter hunt searching for signs of their primary food source, ringed seal.

Wapusk is a variation of the Cree Indian word meaning “white bear”. The National Park, which covers an area of 4,430 sq. miles, is home to one of the largest polar bear maternity denning areas in the world. Cape Churchill, which is within the Parks boundary, is well known as an ideal location to get up close with these beautiful animals and a perfect locations for photographers like David.

“The temperature was about minus 20 that beautiful but very windy afternoon and within the confines of our tundra buggy we waited for about three hours for these bears to wake for their nap and hopefully put on a show. It was a difficult shot, or series of shoots to capture not only due to the wind and cold but also because the scene was back-lit and was white-on-white. There was plenty of time to take a few “practice shots” so I could check my histogram giving me some peace of mind that at least my exposure would be right once the action started.”

The Wapusk National Park is accessible either by helicopter or by a specialized vehicle called a tundra buggy from nearby Churchill, Manitoba which is known as the polar bear capital of the world. On this trip David stayed for 5 nights on the tundra in “The Tundra Buggy Lodge” at Cape Churchill which is about a 6 hour very bumpy buggy ride from town. If you’d like to see the conditions he faced please check out the video below.

Thanks for your comments, Likes and Shares! 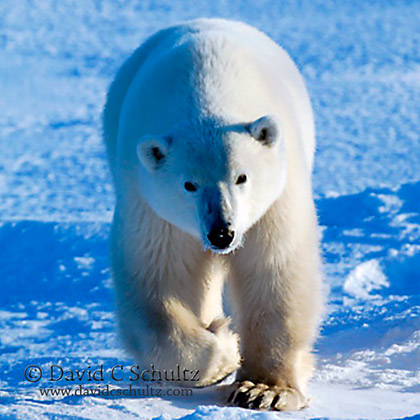