Behind the Shot – Snow Hill Island

Behind the Shot – Snow Hill Island

So, each day was about the same process and we were fortunate to have had six days of beautiful weather during the voyage to Snow Hill Island in Antarctica. I spent about eight hours or more daily on the ice watching, photographing and looking for different possible compositions. One morning I spotted a fairly small iceberg which resembled the head and back of a whale with its mouth wide open. I hiked over for a closer look and was excited to find there was a hole running through the “mouth” to the backside of the berg. Not only that but, due to the ice thawing and refreezing, the opening was an intense blue which made an interesting shot on its own. Immediately I thought how wonderful it would be to have a group of penguins framed within this crystal blue window.

There was the shot except the light was wrong and the penguins were off to the right about fifty yards away. I returned later in the afternoon when lighting conditions were better so as to bring out the intensity of the blue hole but still there were no penguins any closer to where they needed to be for the shot. I set up my tripod and mounted one of my cameras on the RRS BH55 ballhead so I was looking through the hole. I took a few test frames to check my exposure then proceeded to attempt a Pied Piper of Penguins routine. Here’s where a stash of krill would have come in handy.

I walked over to the closest group of penguins, mostly chicks along with a few adults, laid down on the ice and waited. One great thing about penguins is that they are curious, I mean really curious. It didn’t take long for a clutch of chicks to start walking my way. I’d observed this many times over the past few days, how they seem to send out one chick from the gang first, perhaps to see if it gets eaten, and then the rest join in. Along with the chicks the adults wandered over joining my little parade. For over an hour I waited until they got close then I would slide back along the ice slowly making my way towards the spot I needed for the shot. Each time I slide backward the penguins advanced. I had another camera with me to record the “action” and got several wonderful shots.

Finally I figured there were enough penguins within the area I’d selected so I slowly stood walked around the iceberg to where the camera had been left and began clicking away. The idea that first had come to mind was to have several penguins surrounded by the hole but soon I realized that less would be more. And so a waiting game began once again. Slowly the penguins began to get bored and returned to join the rest of the rookery. And then it happened. It’s so rewarding when an idea and composition finally comes together, especially when dealing with wildlife. The whole experience of spending time with this group of birds, on the ice all by myself is one I will never forget. What a privilege.

So often I hear the remark that “you must be a very patient person” but I believe a more accurate word is tenacious. I’ve been so fortunate to have now traveled to Antarctica nine times so far and each trip, during different seasons, locations and weather conditions has brought with it so many photo opportunities. I’ve only been able to photograph the Emperor Penguins this one time which in a way makes that experience all the more memorable.

You can find out more about my upcoming trips under the Tours tab on my website.

View some of the video I’ve shot as well on my YouTube Channel. Be sure to check out the time-lapse clips which condenses 18 days into a 3 minute clip! 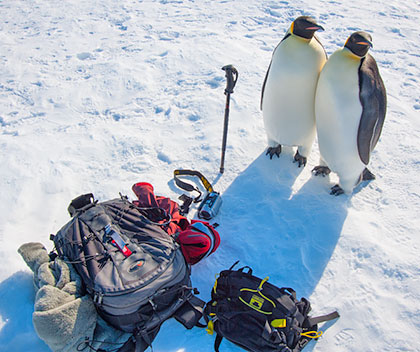 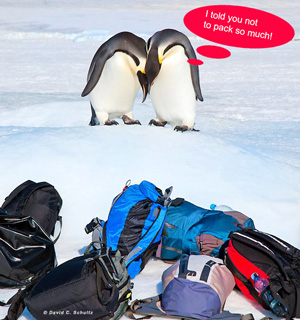